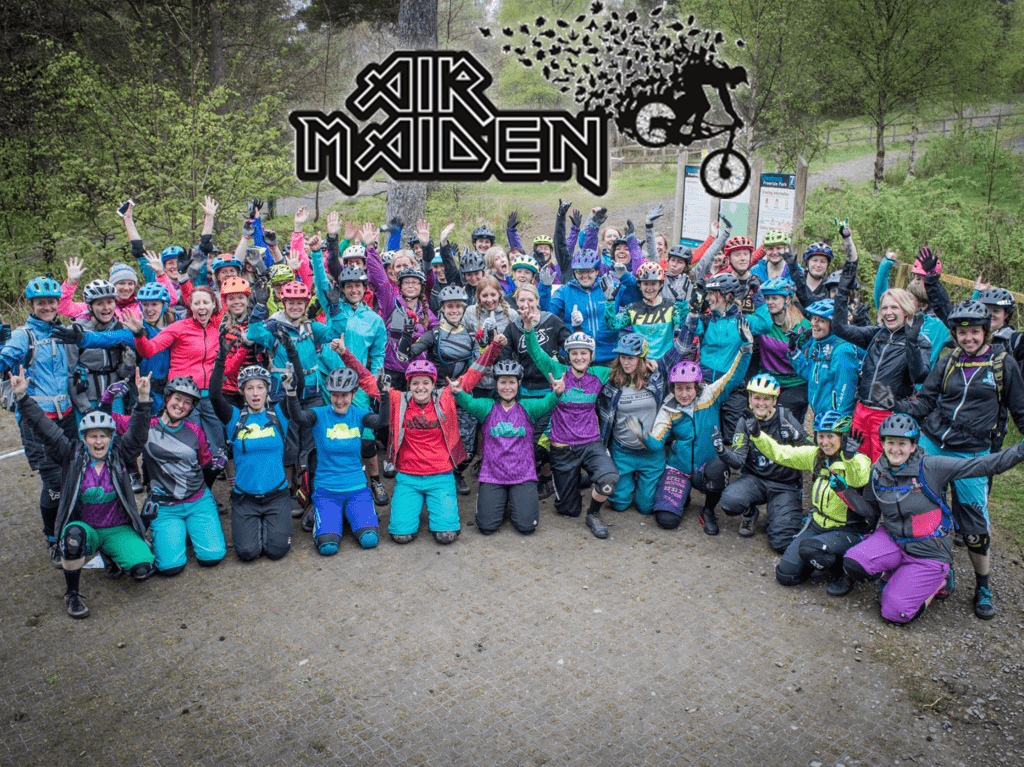 If you read my previous article about the digital wonders of the mountain biking world you might have seen  “If she can do it”, a film about an amazing bunch of women learning how to ride their bikes how to jump and how to throw in a trick or two into the mix. Since I first watched that film I have been wishing for an event like this to happen in the UK. Much to my surprise such an amazing event already does exist – Air Maiden.

Air Maiden Freeride is one of the few female-only coaching weekends in UK. Air Maiden was started by Lynne Armstrong, an amazing scottish lass who has aimed to bring the Crankworx to Glentress. This after winning best trick at Whistler Crankworx with a corked backflip and coming fourth in the women’s slopestyle category. Every year, since 2008, the freeride park in Glentress is closed to the public for the weekend and a group of women learn how to jump higher and shred harder.

Last weekend I packed my bags and travelled the four hours up to Scotland. After a long journey to the Tweed Valley the hot tub in our Air B n B cottage was extremely welcome. This isn’t really relevant but I just wanted to brag a little bit.

The event itself started off in the early hours of the Saturday (9am probably isn’t really “the early hours”) at the bottom of the freeride park. I have been to a lot of trail centres and sampled their skills areas, this was different. It had big table tops, north shore and drops aplenty. It is safe to say I was a little bit nervous looking at the signature jump onto a freight container at the bottom.

The main aim of the event was for professional female coaches to provide top notch instruction to other women, in a supportive and encouraging environment. The coaching this year included beginner or intermediate jumping,  beginner or intermediate drops, cornering as well as a kicker session. As I am practically a dodo and my drops have a lot to answer for, I have gone for beginners jumps and then beginners drops followed by an intermediate lesson. My sessions were spread out throughout the weekend, so it gave me time to ride my bike, talk to so many ladies, make new friends and practice my skills on the trails around Glentress.

Working on our body position, I decided to be a monkey instead

All of the coaches were very knowledgeable and personable, and very well equipped to teach their classes. However Lynne’s lesson on jumping was probably my favourite and I definitely felt like I progressed much further than in any other aspect. Lynne’s teaching techniques were very different to what I was used to before, and in many ways so much simpler and easier to understand. The jumping malarkey has been the bane of my riding life, with all of the youtube videos telling me how many times you need to move your weight back, forwards up and in zig zag, After that Lynne’s method will make you wonder why no one told you this before. Lynne’s approach was different, she showed us the starting position and tabletop position, told us to add some pressure on the lip and my wheels started lifting of the ground seamlessly.

All of the teachers were understanding, patient and positive. The classes I took part in had a maximum of 8 girls and they lasted 1h 30m so there was plenty of time . It was a small enough group for it to be effective and supportive. The time might not be enough to dial the perfect technique, but it is just enough to explain it and put teaching into practice.

After a first day of incredibly supportive, albeit a little cold, learning sessions we were all invited for a barbeque at the Glentress Peel centre. Delicious burgers, vast amounts of coleslaw and hummus were the order of the day. We drank ‘Air Maiden’ beer (supplied by Tempest Brewery) and took part in a bike quiz. My favourite part of the evening was the many film screenings featuring amazing mountain biking women. Nothing gets you stoked like a group of women shredding it down the mountain!

At the risk of sounding like a broken record, Sunday was as uplifting as Saturday. In the morning, we learnt a bit more, played on the bikes for a bit longer and then the freeride competition began. This involved the ladies putting their recently acquired skills to the test, with a few prizes for those who had progressed the most. Many women dressed up as sheep, bumblebees, unicorns and fairies and blasted it down the hill in front of an eager crowd. It was probably the most positive ‘competition’ I have ever been a part of. If you are a fan of ‘survival of the fittest’ then this probably would not have been the event for you. After the freeride competition there was more in store for us, those who had practiced on the kicker got to show off in a jump jam! Whips, turn bars and one-legged jumps were being thrown down by our talented ladies. It was clear to me that if we are ever going to see a women’s category at Crankworx then it starts with events like Air Maiden.

The ladies dressed up in some great costumes this year

I was very sad to leave as I made new friends and strengthened existing friendships. I learnt a lot and had fun doing while doing it. I left feeling like I wanted to put my new skills into practice straight away, but luckily I fell asleep in the car after too much scotch pie on the way home.

Lynne and the women of Air Maiden have achieved something really great in the borders of Scotland. She has shown that the more extreme side of mountain biking is just as accessible to women as it is to men. It was clear to me that the girls can can throw whips and nail drops just as well if given the chance.

A bit less of a dodo

I am already looking forward to next year but if like me you might not be able to wait that long, Lynne has organised an Enduro Maiden, or you can attend a coaching clinic, more details via Air Maiden’s website.

All pictures thanks to Greg Dickson