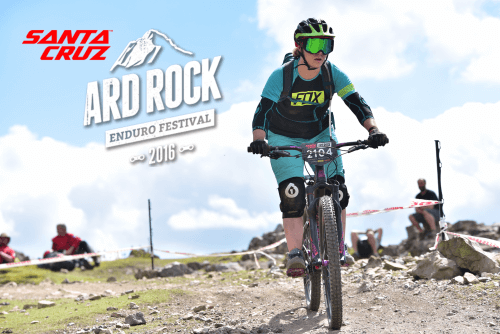 Sometime last year, back when I first decided to get serious about mountain biking, I had a brilliant idea and signed me and my partner (aka Mr Betty) up for the ‘Ard-Rock Enduro.

‘Ard Rock Enduro takes place each year in the remote village of Reeth in the North Yorkshire Dales, as the name suggests one of the most northerly parts of Yorkshire. It is a stunning and breath-taking venue that lies in a valley in between gorgeous heather-covered hills. Hills that I would later be sweating and puffing to the top of.

There were three different Events to choose from; Enduro (the full 45 km ride with 5 stages), Enduro Sprint (30km ride with 3 stages) and Enduro Sport which was a slightly more relaxed version of the Enduro itself (still 45km with 5 stages). I took a common sense approach and booked us onto the Enduro Sprint. Mr Betty had entered a few races but that was a long time ago, and we had both eaten a lot of pizza between then and now. Despite entering the easier of the three options the total incline and descent was around 2000m and it certainly sounded very daunting when waiting at the start line on Saturday morning.

I will keep the plates on the bike all year long…

I planned to do lots of exercise and lots of riding in the build up to the event in August, preparing myself physically and mentally for the 30km of arduous climbs and hazardous descents that were to come. In the end the time flew past and I was still in my pyjamas, eating pizza and watching Game of Thrones somewhere around July. Having attempted Ard Rock now I can certainly advise that a good level of fitness is required, I found myself cursing each and every one of those pizzas on the first big climb.

The event itself is quite easy to find and took us a little over one hour from Leeds. Probably best to remember that there is little or no phone reception in the valley, if you are using a phone to navigate with you might need to travel blind until you get out of the Dales, so try and remember your way in or lay a trail of breadcrumbs on your way. When travelling into the village, everything is well signed and you will be signaled where to go by the army of marshals (presumably volunteers?).

One of the first things to hit me when we arrived were just how many mountain bikers were attending the event. In the few years since its inception ‘Ard Rock has grown into a big event in the mountain bike scene.

The entire event had a great atmosphere with hundreds of people there to race or just spectate. There were a few camping fields, with more than a few campers, adjacent to the main village where all of the events took place. There were lots of tents with a variety of bike-based brands trying to lure you in to play with their equipment and incredible displays. It looked like a great place to visit with families, dogs and friends. There was something to do for all. Every person at the camp clearly loved bikes, and it felt incredible to be surrounded by your own kind.

Great atmosphere in the main camp

Sadly we had a race to take part in. The transitions leading up to stage number one were steep, very steep, following a tarmac road up the hill we had earlier enjoyed on the drive into town (what fools!). Finally after a long struggle up that felt like forever, we were pointed towards a nice heather hill that slowly but surely got us towards the first stage and allowed my tires to find some grip. We arrived at the start of stage one and after a significant amount of faffing we were ready to set off. I had seen the go pro videos, I was expecting this to be a walk in the park so to speak. The moment I got into the field I noticed how quickly that uphill the trail turns into a speedy loose descent.

Stage one is epitomized by steep chutes with sniper rocks littered around, this track waiting to catch your pedals or burst your tyres. Either you go fast, or you are not going to get down at all, but I felt like I was riding at the edge of my skills the entire time. After the descent down the face of a quarry came a grass section, that you need to hit flat out down to the forest. If you were to fall anywhere – the forest seemed like the best place to do so, and so I cordially obliged. Customarily steep and rooty singletrack will welcome you in between the trees. There was one major upside; if you fall you will land your butt in the softest loam in the world, trust me!

This was the softest landing I had this weekend!

The second uphill numbers amongst the best hill walks I have ever taken with my bike. It felt like I was climbing all three Yorkshire peaks, but with an enduro bike to weigh me down. I found it quite reassuring to see most of my fellow racers walking up the hill with me. After reaching a gate at the top of the climb, we followed the ridge line of the mountain for another 10 minutes, this time on a bike, and reached the second stage in the middle of what felt like an actual tornado. The headwind at the start of stage 2 was intense, at some point I think I may actually have been pedaling backwards. If you thought that the first stage was steep and rocky then second stage was equally challenging; the only difference being that the turns were tighter and rocks were more obtrusive, a reward for making it up that climb. I used a combination of my ‘super enduro skills’ and a lot of walking to make it down stage two in one piece. Mr Betty was a different story and made it down the stage in just over four minutes, as he later recounted to me with phrases like ‘wide open’ and ‘gnarly’ being used with aplomb.

Ok so maybe I wasn’t entirely honest about stage two just now. I had already taken a fairly big slam on stage one, which contributed to taking an even bigger slam (followed by a series of smaller slam-lets) on stage two. These crashes left me feeling dazed and confused, my heart wanted me to continue on to stage three but the little birds circling my head won out and I retired to the safety of the camp with my tail firmly between my legs.

Mr Betty went on to enjoy what I am reliably assured was a horrifically arduous transition up to the start of stage three. Whilst it seems like options were limited it would have been good to get more out of the landscape, and make less use of the long and winding roads. To cut a long story short I am informed that Mr Betty was on to “an absolute belter” down stage three when he enjoyed a double flat on one of the many rocks half way down which cost him what would otherwise have been a stage win for him (I’m sure…).

Mr Betty charging down the hill on Stage 2.

There were a lot of women at ‘Ard Rock Enduro, but out of 2214 contestants there were only 87 women taking part, this translates to almost 4% female participation. There were a lot of women around the campsite but it seems pretty clear that women aren’t taking part in any great numbers yet, something I’m sure the organizers will be keen to improve over the coming years. It was great to see Tracy Moseley taking part in the event, and getting to meet her allowed me to tick something off my mountain bike bucket list.

If you’re looking for an easy, ‘entry-level’ enduro to get you started then I am not sure ‘Ard Rock will be for you. If you are looking for an excellent wood-fired commiseration pizza at a great price then I can wholeheartedly endorse the festival’s many food stalls. If you have experience riding enduro events and feel comfortable with very long transitions followed by short but intense downhill stages then you will definitely get a lot out of Ard Rock, Mr Betty for one had a big smile on his face all the way through.

Finally I need to thank all of the Marshalls and few bystanders that helped me out, every time I went over the bars (or doing Cranky Betty’s trademark “STB – side the bars”). Everyone involved in the event; organisers, spectators, racers and the rest were great and the atmosphere was friendly and welcoming all day.

Thank you all for a great weekend!