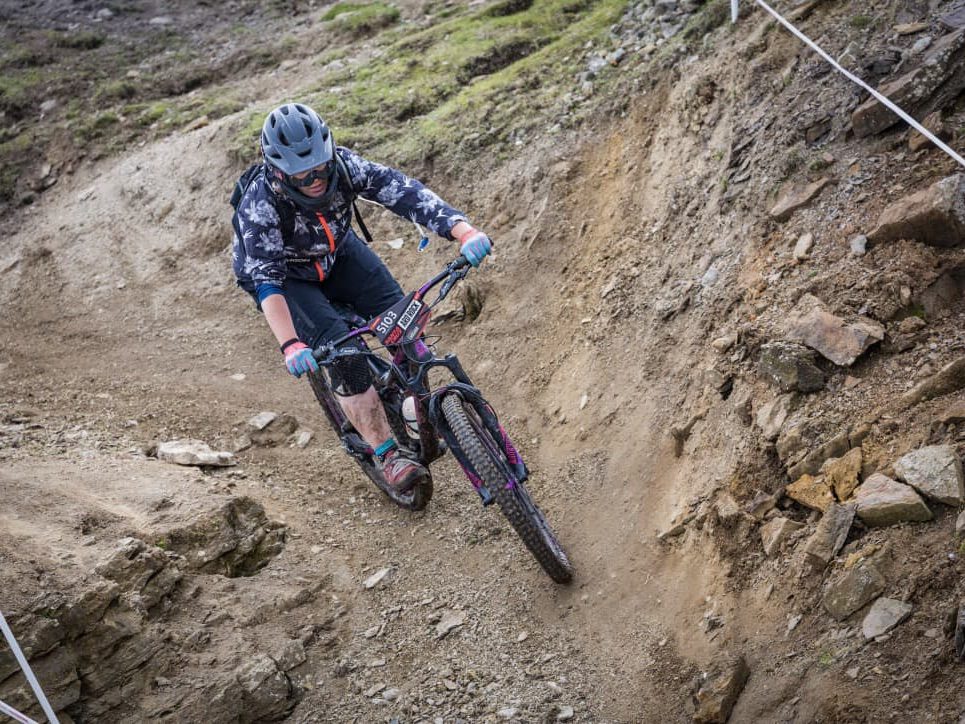 I can’t believe that it has been a year since last time I was writing about Ard Rock Enduro. If you would like to learn about my last year experience, you can read it here.

For those who haven’t heard of ‘Ard Rock enduro, it is one of the biggest enduro events (and mini-festivals) in the UK. Based in Reeth in the beautiful Yorkshire Dales, the small town fills up in the first weekend of August with tents, people and lots of bikes. A lot of interesting bike brands set up shop to present their stuff. Thats right, not only crank eat delicious pizza and drink beer, but you can have a nosey at the latest Juliana bikes at the same time. Also there is some riding to do.

To see this stage, you had to be prepared to get tickets fast!

Most of the tickets for the various race categories sold out in minutes but somehow a few of us managed to sign up, and we put it out of our mind for a few months. Summer arrived and thoughts began drifting back to what we were in store for. ‘Ard Rock Enduro 2016 was a blast but it certainly involved a number of “tumbles” for me, I wasn’t keen to repeat that this year.

For 2017 the event has expanded to include 4 different race categories. The main Enduro is still the start of the show and this is where you will find the professionals duking it out with the amateurs on a 45km loop with 6 demanding descending stages.  The “Sprint” category is a shorter 35km loop that includes (probably) the harder three stages of the course. These events take place on the Saturday, with camping available on the nights before and after to give you time to settle in. Sunday sees the “Sport” category riders set off, they will follow the main 45km trail with the six descending stages, but it is altogether less competitive (supposedly) so riders can take their time and enjoy the stunning scenery. Last but not least is the “Intro” category which is new for 2017. The Intro takes in a 30km loop and covers three of the (perhaps) “easier” stages across the route. After a challenging race last year I opted for the Intro category this year, in an effort to ensure I finished in one piece.

On the day of the race we woke up at 5am to get to Reeth in time for a 7:25 registration slot and a 7:55 start time. I was as surprised as anyone else that I could actually make my pedals go round at that time of morning.

Do not be fooled by the name of the ‘Ard Rock “Intro”, the course was still filled with rocky descents and steep chutes and the climbs to the stages were devilish. We started off from the rainy camp and climbed up through the muddy fields and hills of Swaledale. The climb was steep in places and seemed never-ending. It took in a mixture of long road sections as well as double and singletrack. It is safe to say that I wasn’t the only one holding up more ambitious riders in the swampy, boggy fields in the first few miles, I was rewarded with a number of interesting looking bruises for my troubles. It might have taken us about an hour or more  to our first stage (which confusingly was stage four). The first stage turned out to be a blast! I was incredibly scared before I put my first few pedal strokes down and went through the gate. I was definitely scared of the unknown and, literally, what would be round the next corner however, the moment I started started flowing down the trail all the worries melted away. The track was pedally at first but then the slightly boggy terrain gave way to steeper, rockier singletrack combined with muddy chutes. It was crucial to make sure you were carrying enough speed going down some of the chutes, in order to ensure you could get back up the next hill, at the same time praying that none of those rocks will puncture your tube. I was please to see that my Maxxis Minion DHR combo held up really well across a variety of terrain including razor sharp rocks and considerable amounts of ‘slop’ in places.

The tyres are gripping despite my bad aiming skills…

I came down to the bottom of the stage with a huge grin on my face, to be greeted by a large group of riders with equally beaming faces. It was safe to say that the stage had been a big hit with the punters. I noticed that Mr Betty was just happy that I was alive, I’m sure he had every faith in me!

After stage one (or four – it was as confusing as the numbering of Star Wars films) we climbed another seemingly giant hill and traversed through the soggy moors to get to stage two (the main enduro’s stage five). This stage was perhaps not as challenging as the previous one, but it required a combination of pedal power and courage to stay off the brakes. Like many others I felt I was onto a winner, until I reached an unexpected and sudden drop off in amongst the trail, I just about managed to avoid blowing through all of my spokes thanks to a fairly smooth set up on the Rockshox Monarch on my Meta but I rolled through the finish line half expecting to see a taco’d wheel. On reflection this stage was probably my favourite, it had the scenery and the varied terrain or perhaps it was just that by this point I was relaxing into the task at hand.

From the Intro stage two, it was not that far to the final stage of the day. It took us about 20 minutes to get over to it and I was really excited to set off on the last stage of the day. I was conscious that this level of enthusiasm can often prove fatal. The stage was grassy but very exposed at first, I turned the the first corner and the wind almost knocked me into the side of the mountain, but I managed to cycle through it. The stage was littered with sniper rocks, I had to dart between fences and came into to the finishing straight with another massive grin on myself.

The descent were great fun

Given my experience last year I was happy just to finish, there were a lot of mental battles in the days before ‘Ard Rock, but in the end I was pleasantly surprised with my performance. I am proud to say that I actually managed to finish 4th overall in my category, and 15th out of all of the female ‘Intro’ participants.

There were a few things that I think I couldn’t have done this without and I’m not talking about Mr Betty. Fuelling was key to making it up the hills and still having enough energy for the descents. I ate my fill of Clif Bloks and Energy bars, I know for a fact that I was able to ride faster and further and I never really felt like my energy levels dropped during the event. Clif Bloks are a very convenient way to get energy where it needs to be quickly, they are well portioned energy jellies that actually taste nice and will keep you out of the bonk zone.

Secondly I felt very safe wearing my Giro Switchblade helmet. The helmet allowed me to travel between stages wearing a lighter enduro helmet, but the ability to reattach the super sturdy chin guard kept me super safe on the descents. I have been in two minds about whether this type of helmet could work, but after a long enduro event I can clearly see that it has its uses. The helmet is downhill certified and it certainly feels a lot like the Giro Cipher, its non-transformable sister helmet.

They say it’s not the kit that makes the rider… but it definitely helps.

Another great item that gave me lots of confidence was my Ergon BP1 back protector. This backpack has all the features of Ergon’s hydration packs but its main purpose is the back protector strapped to your spine. I had already got to grips with the BP1 in The Alps and a lighter backpack with added protection was just what I needed for ‘Ard Rock. I still can’t believe how many items the backpack can fit and still feel light and secure on my back.

In comparison to last year’s ‘Ard Rock event I made some changes to my Commencal Meta to make sure it was ready for everything that would get thrown at it. As i said I opted for Maxxis Minion DHR tyres front and back. Despite being DH tyres they are quite versatile and well suited to the rocky and grassy descents of ‘Ard Rock, I always felt like I had enough grip all the time. Also, they are not too chunky or too heavy, making them a great tyre to make your way up the hill on. Rather than focusing my choices around the grassy stages, I decided to make the choices based on the rockier ones. Thus, low tyre pressure (23psi front, 24psi back). If most of the stages would had been soft and grassy I would have pumped up my tyres higher to make sure I cut through the grass faster.

Maxxis tyres kept me rubber side down.

‘Ard rock enduro women’s participation seems to have marginally increased. Out of 2948 contestants, only 165 were women which translates to almost 6%. In comparison to last, year where there were 4% women. Which means there are more of us, but just only by a few more. I appreciate that the event organisers are not responsible but it still felt very much like a lads weekend, the amount of belching, shouting and loud swearing across the moors sometimes left me feeling out of place (I normally do those things when only Mr Betty can see them). In addition there were more than a few times where participants rode as close behind my as they could and then complain when I slowed down or stopped on a difficult section. I might understand if this was happening on a timed descent stage but this was consistently on the untimed transition stages. Some of these incidents left me with the impression that more experienced riders might have entered the ‘Intro’ category to ‘pwn noobs’ out on the trails. That said I understand that events like ‘Ard Rock are fundamentally competitive and these rare incidents did not spoil my enjoyment of what was a fantastic event.

The ‘Ard Rock’s decision to introduce the ‘Intro’ category was undoubtedly a good one. This is a great introduction to enduro, it is still a competitive event so the descents are still hard and steep, and the transitions are still tough and long, but it is designed to give you a taste for tougher things. If you are looking for a way to enter a race for the first time then this is ‘Ard Rock Intro is the one.

As always the pizza was amazing, the atmosphere was great and it was so inspiring to see as many women as there were getting out there to ride bikes. See you next year?