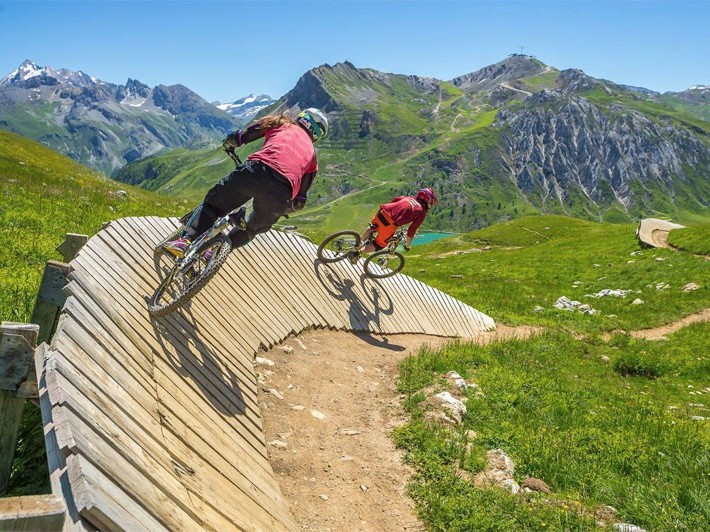 Gearing up for summer holidays

If you are an avid mountain biker then after a while you tend to find that it spills over into other aspects of your life; your house will slowly fill up with tyres and bike parts, you’re constantly trying to recruit non-biking friends (muggles) into the sport and pretty soon you’re going to think about replacing your beachside holidays with a trip to a far-flung mountainous region to hurtle down a different set of hills.

Mr Betty and I have been sitting down recently to think about where we could take our bikes this year, and there are a number of different potential riding holidays on the horizon.

For riders in the UK one of the most talked about riding holidays is a trip to the French Alps. Mr Betty has been a few times before and I must say I am keen to go, but at the same time it sounds like it would push my skills to the maximum at the moment. Whilst I am happy railing around UK trail centre red routes, with the occasional black sections thrown in, I am not sure I have the skills and the stamina to spend a couple of weeks railing those continental berms. That said, the abundance of cheese and bread on offer in the Alps might help to overcome my fear of knocking myself out halfway down Super Morzine.

One of the big attractions of going to the Alps this summer would be getting to to go to Crankworx in Les Gets. The festival takes place over a few days and includes dirt, downhill and slopestyle events and allows you to get up close and personal with some of your favourite riders.

Some of you who read the blog, or who have been ‘lucky’ enough to ride with me, may know that I am originally from Poland. I know that mountain biking is nowhere near as popular in my country of birth as it is in the UK, but there are a number of riding spots in the south of the country in the foothills of the Tatras mountains (think Polish Alps!). I am hoping to persuade Mr Betty that the trails in Bielsko-Biala or the uplift in Zakopane would be worth the 20 hour drive from the UK to southern Poland.

Perhaps one of the major benefits over the French Alps is how much kinder a mountain bike trip to Poland would be on the wallet. With Air B n B rentals setting you back around £30-40 per night on average and Beer being around £1-2. It is certainly cheaper than the well established ski-towns of the French alps. More importantly you can rent a DH bike for £20 per day (instead of around £80-90 per day in the Alps) and the uplift is roughly £12 per day (as opposed to around £50 per day in the Alps). That said, I have warned Mr Betty that it probably wouldn’t be as well established as the Alps, though the chairlift attendants are likely to be just as surly in a whole new and confusing language.

One of the major discussion points once you’ve settled on a destination is how to get there. Almost by definition all of the best locations are far away from major cities and airports, so getting there generally involves travelling in a car or van at some point. This involves pondering whether the bikes and all the gear would fit in the car, would there be a place to store them securely at the other end, would we survive the almost 24 hour drive to most of the alpine locations around Europe? Of course you could always fly to your destination and use a shuttle service to pick you up from the airport. This is perhaps easier in the French Alps where such a service has been in place, primarily for skiers, for years now. The questions then are around whether you are taking your own bike, can it be easily transported on your flight if you are and if not then where is the best place to rent a steed that hasn’t been totally annihilated by the previous seasons riders.

I’ll keep you all posted on what we decide to do with our previous summer holidays but it would be great to hear from you all about your summer riding plans.