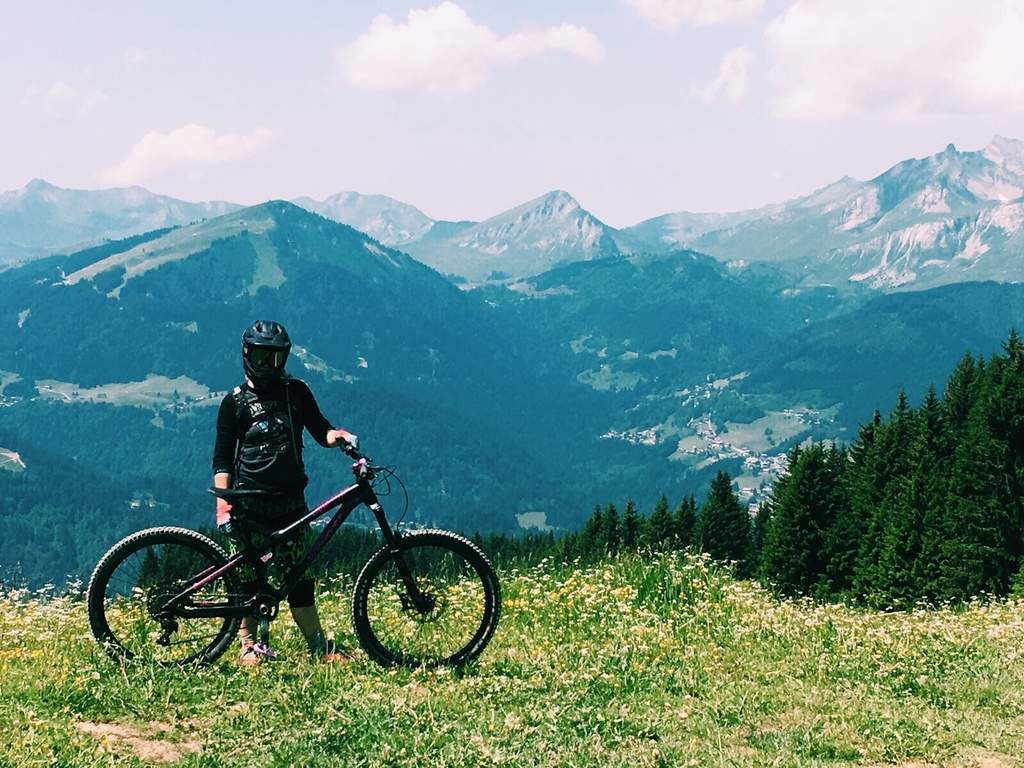 So if you do not follow Cranky Betty on Twitter, Facebook or Instagram (for some unknown reason) you probably missed the fact that we Betty’s made our way to the French alps for the beginning of the season. The trip was planned almost a year before and the seemed to edge so slowly towards the day in June. However, finally the time came.

Both me and Mr Betty packed the little Kia to the brim and travelled across the channel and through most of the France in one day. The journey took us 12 hours and the expense of tolls and petrol added up to about 100 pounds one way (excluding the ferry). Remember to pump up the tyres and minimise the use of Air-con if you want to lower down the cost of your petrol, though this left me somewhat of a Sweaty Betty. If you can avoid paying for the toll roads (“A” Roads) then do as this will save you around £50-70. The road was quite monotonous, so make sure you keep yourself awake with endless games of I-spy and cups of coffee.

When we arrived in Morzine, the weather was scorching and the sun was just setting behind the mountains. I was blown away by the scenery, after several hours in the flat french countryside the views around me were unbelievable. Steep tree-covered hills and ski towns around at their feet. I was glad to go to sleep as the next day was my first day of riding the alps.

I decided to rent a downhill bike for the first few days. Not only to try it out, but also to  ease my way into the much steeper trails. We rented Norco Aurums for a very competitive price from Alan Bike and Ski Shop in Morzine. If you haven’t rented a bike like this before you will usually need to bring your own pedals,we also asked Alan to swap the grips for our  Ergon GD1’s. I found it important to have the contact points as close to normal as possible.

It is worth mentioning that Alan Bike Shop was probably one of the best bike shops in the area for both price and quality. Alan himself was always willing to help out and when he did he never tried to rip you off or charge you for things that you could easily do yourself, we witnessed this on several occasions.  With bikes sorted, we cruised over to Le Pleney chairlift in Morzine to buy our passes (6 non-consecutive day purchase was great value as it could be used any time during the season), jump on the lift and hit our first trail.

I quickly realised that the trails were not what I was used to at all. The trails were often wide, rocky and always dusty. Few places in England prepare you for the types of trail and the conditions in the Alps. Everything is loose, but in a different way to mud. The berms are wide and high and on a straight you can quickly get up to light speed. The Pleney blue route was my first trail of the day and despite being scared of the steepness, there was nothing technical to challenge me. This would be a common theme throughout my time in the Alps, steep trails but not technically challenging. We rode in Morzine in the morning and then transferred across to Les Gets, a neighbouring village with a whole new network of trails. As it was the first day, my arms and hands were in pain by the time we dropped our bikes back with Alan for a clean and service, however the grin did not leave my face at all. I loved the seemingly endless downhill, the flowy nature of the trails and the great weather.

Norco Aurum in the bright sunshine

As we arrived at the beginning of the 2017 season most of the tracks were in good condition and quite smooth. The tracks weren’t rutted with the braking bumps which cause problems for riders later in the season. Whilst there were brake bumps in places the trails were mostly smooth and much easier to manage this early in the season. The beginning of the season comes with other advantages; as it was my first time in a huge bike-park the absence of big crowds was a blessing. No queues to the lifts, no need to wait for other riders at the start of the trails and most importantly not having too many riders catch me up on the way down.

There were some downsides unfortunately as well. As it was the beginning of the season, not all of the lifts would be open. I was particularly to make it over to the Les Lindarets area but not to actually ride the amazing trails in Chatel, another trail centre near Morzine.

I was struck by how much there is to do in the area. You can ride different trails every day for two weeks without a problem. All of the mountains in the area are connected to each other using well signposted traversing trails that enable you to get there without an issue. There are an abundance of mountains that you can get to only using lifts and bikes, but you can easily leave France and cross the border into Switzerland without even knowing.

My favourite place to ride by far was Les Gets. 90km of trails and 3 lifts dedicated to mountain biking. There is a large variety of skill levels and different trails. Les Nauchets blues and reds are varied for riders and even feature a root or two in places. The roots here in the Alps are usually dry, they don’t strike fear like the slippery roots in the UK and are a great change from the smooth dusty and rocky trails. One of the greatest trails I have ever ridden was Freeride du Canyon. It is a black graded downhill trail, the main technical features include a few smallish drops as well as lots of rocks and roots. The trail gets its name from the deep sided canyons and ditches through which the trail snakes on the way back down to Les Gets. Don’t get me wrong though, despite being my favourite track it was daunting due to the steep, high sided canyons you are forced through at speed. The main thing to consider when going down it is making sure you can do it without stopping, as this might block the people behind you and as I found there really is nowhere to pull to the side.

Roots in Les Gets

Another favourite of mine was Supermorzine, on the other side of the Morzine valley. Firstly, you need to take a cable car half way up and then carry up on another ski lift. There are a number of runs at the top of the mountain which run back to the ski lift but currently there is no well signposted way to get down the bottom half of the mountain. The main black trail below the Supermorzine cable car has become unmarked and has not been well maintained, you probably could still do it but it would be no be quite so fun these days. The top trails have been maintained very well. They are smooth, fast and dusty. The lines are very well designed and allow you easily to create fast speeds, it is really more a case of ensuring you can slow down before you run out of berm.

Apart from the trails network there are lots of great events going on in the area. This year in Les Gets there was Crankworx. A great event that I have watched on television, seeing slopestyle stars knock out amazing tricks. It was quite surreal and unbelievable to stand so close and speak to the people I recognise from the internet and magazines. Most jaw droppingly, I got a kiss on a hand from pinkbike’s own Brett Tippie, that kept me going for the entire week much to Mr Betty’s dismay. My favourite event by far was the pumptrack challenge. Standing so close and heckling the athletes was exhilarating and definitely fun. Mr Betty and I cheered Manon Carpenter on for the win until we were hoarse however both the legendary Jill Kintner and newcomer Caroline Buchanan were too and took the top two spots.

Manon Carpenter during the Pumptrack challenge

On our last day of the holiday we could see the longstanding Passports du Soleil bike festival coming together. This is a bigger bike festival with a variety of races and different categories. Next year it is something I would love to go back and have a go at.

Because of the Crankworx Commencal bikes had set up demo days for the public to try out their range of gravity bikes. I have a lot to say about these bikes that I will put down in a separate article but it is worth when going on your holiday, to see if there are any companies demoing bikes at the park. This will give you a chance to try out a different bike properly and have some fun without worrying to much about rock strikes on your steed.

I have tested Commencal Furious

I could probably go on for days about all the other things that you can do. You can always try paragliding, rafting, walking or climbing. On our days off we stuck to swimming in a beautiful lake in Montriond surrounded by majestic mountains. Otherwise we were eating raclette cheese and tartiflette or drinking Ice coffees in a coffee shop in Morzine. Without a doubt you should also remember to go into most of the bike shops in the area as there is an abundance of them and you can get easily get lost with the wide variety of things that you would like to purchase.

I wasn’t sure what to expect from a trip to Morzine, that is not to say that I hadn’t heard stories and recommendations from a number of riders, but I was still nervous about my own experience. I am sure that this is true to say of a number of different bike parks around the world, but I loved spending time in a place that felt so ready and able to cater for mountain bikers. That is not to say that the UK doesn’t have amazing and varied trails, but to spend weeks improving and building my confidence (whilst barely putting a pedal stroke in) and at the same time completely failing to get used to those breathtaking views was something really special. I won’t forget my first riding trip to the Alps and if you are considering taking your first trip you should just go for it.